Weaning refers to the process of stopping breast or bottle feeding. Discover and learn how to identify the behavioural signs that your baby is ready for baby-led weaning.

Baby-led weaning, otherwise known as BLW, is a relatively new concept. Over the years there have been many changes in our understanding of infant nutrition. Not so long ago it was common practice to offer babies rice cereal right precisely at four months and for them to have strained, diluted orange juice, Weet-Bix, drops of egg yolk and even vegemite mixed through water. For generations the advice from health care professionals has also been to introduce babies to solid foods gradually and not to offer any textures other than purees. Limiting food variety and what was on offer to a few rather bland and neutral tasting foods was just common practice.

But BLW puts a new slant to the whole process and its popularity is building momentum. There are now blogs and BLW groups who are keen to share their own stories about how BLW is working for them and their baby.

From around six months of age, most babies are ready to accept solid foods into their diet as well as milk. A baby’s gut matures between the ages of four and six months and can then digest and metabolise foods other than just milk. Many parents choose to offer solid foods at less than six months and in the majority of babies, this does not cause any problems.

First, it’s important to clarify what weaning means. Depending on what country you live in, the word weaning takes on a completely different meaning. If you live in Australia, New Zealand or the United States, weaning refers to the process of stopping breast or bottle feeding. But if you live in Britain, then weaning means adding solid foods to a baby’s diet. For the purpose of this article we’ll stick with the British meaning – offering foods other than just milk.

What does baby-led weaning mean?

Essentially BLW means that a baby is encouraged to change their diet from being solely milk based to eating solid foods. As mammals, our diets need to be predominately milk until we are at least six months of age. Throughout childhood and our adult lives, milk and dairy foods still form an important part of our overall dietary intake.

Another main principle of BLW is that the baby is in control of what they eat, right from the start. So instead of being offered soft, pureed food from a spoon, advocates of BLW introduce their little one to a family diet and don’t restrict them to “baby” specific foods.

Some people believe that BLW is a more natural way of introducing solid foods. The baby gets to choose what they want to eat, how they want to eat and the onus of control is not on the parent but firmly with the baby. Another belief is that as the baby’s manual dexterity matures so does their gut. So essentially, BLW is a natural progression of matching eating with other developmental milestones. Being able to sit up unsupported, reaching for things, grasp, transfer objects (food) to their mouth and becoming able to chew and swallow all occur at around the age of six months. Importantly, the skills involved in hand-eye coordination are important for BLW to work.

Another benefit is that BLW allows for individual rates of maturity and development. Parents set up the baby’s environment so they get to choose what is right for them, rather than adhere to a “one size fits all” approach. For babies who just want to take their own sweet time to eat or who aren’t as motivated as others to eat solid food, then BLW allows for individual maturation.

Some health professionals believe that BLW is simply a healthier way for babies to eat. When they control what they eat and how much to eat, their own fullness or satiety signals become the main influence for when they stop eating. This leads to a less overeating and potentially, less risk of obesity and all the health-related issues which go along with it.

Another popular belief amongst supporters of BLW is that when babies are allowed to feed themselves, they are naturally drawn to foods which contain the nutrients their body needs. When parents interrupt this process by spooning food into their baby’s mouth, there is a potential for dietary deficiencies to occur.

How do I start baby-led weaning?

Look for your baby’s cues that they are ready to eat solid food. This is an important place to start and your baby will let you know when they are ready:

Will my baby eat straightaway?

This is unlikely. Although babies who are exposed to BLW tend to be a little more advanced and adventurous with their eating habits, they still need to evolve and have lots of practice. Most babies need to start off by practicing the skills of reaching and picking up their food and getting into their mouth. This can be a messy business and take quite a few attempts to actually connect the food with where it needs to go. But in the process of trying, they are learning lifelong skills in feeding themselves.

There is a lot of experimentation and practice in the early days of BLW, so patience is important. Just like any other new skill, the transition from being a novice to being competent can take hours of practice and exposure. So, it pays for parents not to be too focused on the outcome, e.g. how much food actually goes into their baby’s mouth, but rather the enjoyment and fun of the whole process.
Hungry babies eventually eat and when they are given enough opportunity to feed themselves they generally do very well.

Some people believe that breastfed babies adapt to BLW more easily than those who are bottle fed. There are thought to be two reasons for this.

But whether this theory is true is yet to be proven, and it may be just another one of those old wives tales that makes mothers who choose to bottle feed their baby feel guilty about their choice.

Some babies aren’t too keen to eat and chew until they have some teeth. These can erupt at any stage from around six months onwards. Babies can’t still chew with their gums so it’s important to give them the opportunity to practice.

So look for your baby when BLW:

Solid foods form only part of a baby’s diet and should not replace breast milk or formula. Milk still needs to be a major source of a baby’s dietary intake for the first twelve months of life. If your baby starts to refuse their milk feeds and favour solid food, then you may need to reduce the amount and frequency of the solid foods they’re eating.

Stay calm. One of the major benefits of BLW is that it is designed to eliminate the stress of choosing, preparing and then offering only baby specific “special” solid foods. It pays for parents to focus on the pleasures of watching their baby explore and learn to feed themselves rather than see this time of worry and anxiety.

What if my baby chokes?

You need to be with your baby whenever they are eating and supervise all of their meal times. Although your little one may think they’re terribly clever and able to feed themselves, they don’t know what is safe and what could pose a risk. Anything and everything is likely to find its way into their mouth.

Foods need to be soft and of a size where they can be picked up and chewed by baby before swallowing. When food is too small and hard it can go into the baby’s trachea (wind pipe) and then into their lungs. Although this is uncommon, it is still a big fear for most parents.

The general advice is that choking is silent, gagging is not. So if your baby is gagging when the food hits the back of their mouth this can be pretty normal. Some babies have what is called an oversensitive gag reflex and they need lots of practice and exposure to foods to become used to this sensation. Of course the tendency when you have a baby who does this is to just stick with offering pureed foods and soft mush. But this doesn’t challenge the baby to cope with lumps and just defers the inevitable. It also limits their chewing practice which is very important for speech and language development.

What foods should I offer my baby?

Anything and everything really, but you may want to just go a little easy at the start. Vegetables such as carrots, zucchini, broccoli and cauliflower all cook/steam well and maintain their consistency and shape when cooked. They are also easily digested and colourful so babies are drawn to them and inquisitive about what they taste like.

Offer soft fruits as well, such as mango, banana, kiwi fruit and orange. With any fruits, just be mindful of the soft fibrous portions which can be difficult to chew.

Rice cereal is still a valuable food source because it’s high in iron and easy to digest. But supporters of BLW say that spooning in mouthfuls of soggy cereal doesn’t support the baby’s skills in learning to self feed. You could offer your baby a spoon as well; dollop some cereal on the tray of their highchair or even encourage your baby to use the cereal as a type of a dip.

Soft meats – cut up into small pieces or alternatively, in a large piece which they can suck on are ideal. Red and white meats are high in haem iron.

Avoid offering your baby “top-up” amounts of food when they are showing they’re not keen to eat anymore. This can impact on their willingness to feed themselves at the next mealtime. There needs to be a “whole approach” to feeding management with BLW, so it is normalised as the way the baby feeds all the time.

What does the science say?

It seems that babies who fit into BLW practices seem to eat less in the early stages than those who are conventionally spoon fed. This makes sense, of course. Whether it leads to problems relating to poor nutrition is yet to be proven. But with time and practice, most babies seem to catch up with their peers and after a couple of months of being introduced to solid foods they seem to match each other for variety and volume. 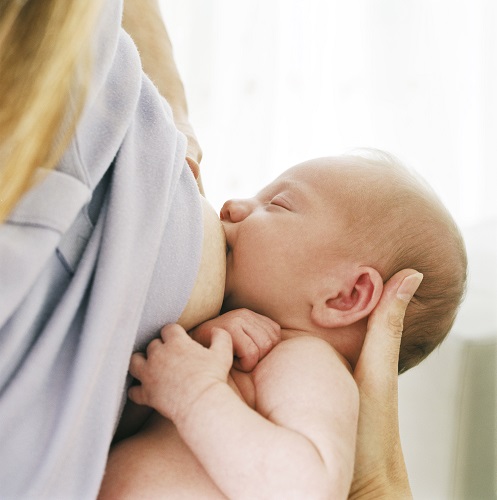